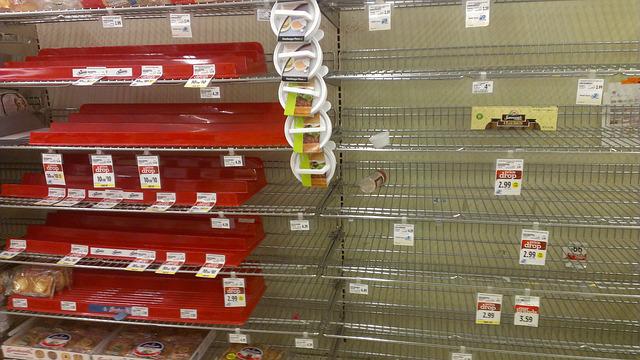 The problems with the availability of sugar goods do not end there. There are more and more reports of a lack of vinegar on the shelves. We checked – in large-format stores there is actually a huge problem with the goods. Retailers, wholesalers and manufacturers, however, assure that “the situation is under control”.

Reports of the vinegar problems are already popping up on social media. We checked the situation in several discount stores in Szczecin – incl. Lidl and Biedronka. Vinegar was not there, and the sellers cannot explain this situation.

However, there are concerns that vinegar will be similar to sugar. People started buying out items from stores, and chains were forced to put limits on that merchandise.

Not on the shelves but “There is no need to panic”

For now, the retail chains have officially denied that there are problems on a larger scale. – In all our stores, customers have access to a full range – says  Aleksandra Robaszkiewicz from Lidl Polska.

We spoke to vinegar producers and wholesalers. They emphasise that there are no “systemic” problems. Production is similar to previous years, and sometimes even higher. However, the demand from customers is much higher.

The situation is starting to irritate the customers. In one of the stores, we heard one of them complaining that “this product was available even in the People’s Republic of Poland”.

What’s the problem? Representatives of the trade and food industry do not want to speak officially. However, they admit that they had been expecting problems with vinegar for some time.

– This time of year, when there are already pickles, usually the demand for vinegar increases. It is not surprising. It is surprising that this year the demand is really huge – we hear in one of the wholesalers.

The causes of problems with vinegar are in part analogous to those with sugar. Food demand is high across Europe, our logistic chains are broken – and people are afraid that some items will run out. So if the first reports come out, they start to make huge stocks.

The spiral turns, although sellers and producers warn against it. Panic and buying excess quantities of goods always lead to a sudden increase in prices and a shortage of goods on the market.

Perhaps it is because people are already getting ready for winter. And yet they hear that this one will be extremely difficult. So they make stocks, especially of those products that can be stored for a long time – we hear from the manager in the trading industry. He adds that “vinegar is always a commodity that grows in popularity around August”. However, this time the demand is exceptional and – as he says – it is difficult to explain it only by seasonality.

It is also not that vinegar and sugar are the only items that are lacking in stores. Defective shelves are an increasingly common sight in our discount stores and supermarkets. Sometimes some hygiene items are missing, sometimes animal food, and sometimes, for example, pasta. The chains usually explain this with supply problems, but point out that “there is no need to panic” and that “the situation is under control”. We have even heard from a representative of one of the trading companies that it is soon possible to reduce or even abolish sugar limits.

However, another scenario that can be observed in Germany may materialise . There, at the beginning of the war, there was a shortage of sunflower oil in Ukraine. The stores coped with it, but the defective shelves remained. Currently, it is difficult to predict what may be missing – sometimes there are problems with frozen food, sometimes with dairy etc. The Germans, however, emphasise that “the situation is not dramatic”, and it is simply possible to live normally with the shortcomings that exist there.

Orlen: the merger with Lotos will take place this summer. EC...