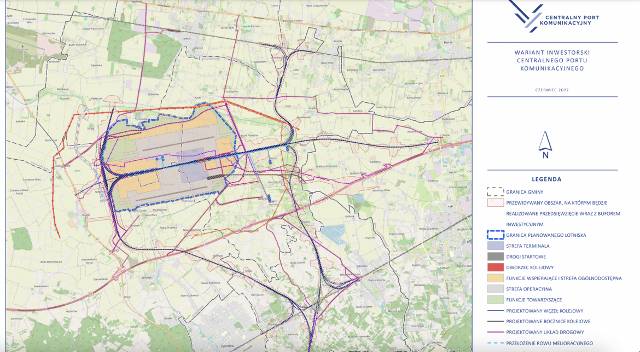 Location of the Solidarity Transport Hub

The CPK company has prepared the plans for the Solidarity Transport Hub, which will be an element of the application for an environmental decision. This stage was announced in December last year, when the CPK presented the area of ​​the preferred location of the Solidarity Transport Hub in some of the municipalities: Baranów, Teresin and Wiskitki.

The preferred location of the Solidarity Transport Hub, presented in December 2021, was selected by STH experts – with the support of external consultants. As announced, the preferred location was then verified based on the analyses of, inter alia, master planner. The area of ​​the planned project implementation has been specified in more detail, the company states.

According to the announcements, the area of ​​the investor variant for the airport part of the project is located inside the area of ​​the preferred location. Railway, road and accompanying investments are also partly located outside of it, e.g. to ensure the continuity of infrastructure and connect with existing routes.

As part of the airport part of the project, two parallel runways with a length of 3,800 m each (north and south) will be built. The area between them (the so-called midfield) will be 2,500 m wide. The main facility will be a passenger terminal located on the southern side of the railway line.

The railway station is to be fully integrated with the terminal, constituting one of the basic elements of the airport. According to the company, it will provide a convenient, direct connection, among others with Warsaw and Łódź.

Two runways under Stage I are located on the east-west line, parallel to the existing A2 motorway. During the work on the master plan in the E1N investment variant, both runways were moved 150 m south in relation to variants 2 and 3, and the southern runway was moved away by 850 m west of the north. The CPK explains that the idea was not to interfere in the Pisia Gągolina valley and to run the railway line over the bridge over this river and under the terminal slab.

The railway tunnel in which the CPK station is located was planned at a depth of approx. 14 metres below the future airport level and is covered in the central part of the airport’s operational zone (approx. 2.5 km long). To the west and east, the tunnel turns into an open trench, from which part of the railway lines goes to and above the ground level to obtain the possibility of collision-free “unplaces”.

As part of the work on the technical-economic-environmental study (STEŚ), a total of five variants of the CTH railway junction integrated with airport solutions are analysed. All variants are adapted to the layout of the station, terminal and runways within the airport, while they differ in solutions outside this area, including in terms of incorporation into the existing railway lines of PKP PLK and High Speed ​​Railway (HSR) lines planned under the CPK Railway Program.

The CPK node includes sections of new HSR lines and connection pieces with the existing railway network. The central point of the node is the station integrated with the airport terminal.

Providing new access roads to the Solidarność Port area will be of significant importance for its functioning. They will provide access for passengers and employees, they will also enable cargo transport, and thus connect the new airport with the road network, including the A2 motorway and the national road No. 50 (DK50).

Let us recall that until the airport is launched, the 90-kilometre section of A2 Warszawa – Łódź will be extended by GDDKiA by one lane in each direction , which will increase the capacity of this route and facilitate access to the Solidarity Transport Hub.

A northern bypass of the airport has been designed on the northern side of the airport area, which will provide an additional east-west connection between DK50 and the terminal, and will also serve for local connections between Szymanów and Wiskitki and Baranów.

This road will also allow access to potential new facilities in the northern part of the area covered by the airport spatial development plan. In the longer term, the road will facilitate access to the terminal from the future Warsaw Agglomeration Ring Road (OAW) planned by GDDKiA on the west side, combining a number of potential investment areas.

On Wednesday, June 15, voluntary public consultations will start as part of the work on the preparation of the environmental impact assessment report. The company also emphasises that the area on which the airport will be built has relatively low botanical values.

The next step will be the submission by the STH of an application for an environmental decision , which is planned for the third quarter of this year .

It determines the way in which the investment should be designed and implemented so as to ensure respect for the natural environment resources and minimise the nuisance and negative impact.

18/05/2022 0
PAIH helps Ukrainian entrepreneurs run a business and Diia.Business is a project promoting entrepreneurship and export, initiated by the Ministry of Digital Transformation of...
Go to mobile version