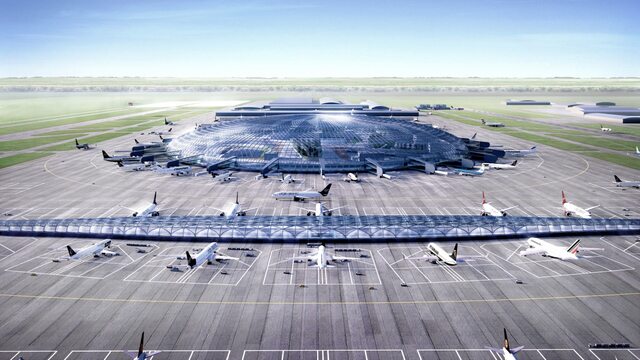 Centralny Port Komunikacyjny in Polish or The Central Communication Port (CPK) in English is launching tenders for the second group of facilities supporting the airport. There will be hotels, offices and parking lots to be built.

The second part of the framework contract for the design of the accompanying infrastructure for the Central Communication Port has started. In  the first part, for which 15 companies applied, contractors were sought, among others cargo terminal, air traffic control tower, airport operations centre, and rescue and firefighting facilities. The first PLN 250 million was allocated for this purpose. Now a tender has been announced for the design of the second group of facilities.

The company Centralny Port Komunikacyjny is looking for contractors for projects supporting the airport and the surrounding “Airport City”. Projects of hotels, offices, commercial facilities and multi-storey car parks are under preparation. The other half of the half-billion-dollar project budget was allocated for this purpose.

“The main subject of the second part of the contract for the so-called supporting facilities (SIE) are works and services related to the preparation of conceptual, technical, executive and construction projects, together with obtaining the necessary permits. The scope of the contract also includes other services related to design, such as consultancy in the course of contract award procedures for the execution of construction works, ”reads the CPK release.

The first part of the project for tenders concerned the design of buildings that are not part of the airport’s core infrastructure. The list includes, among others such facilities as a waste sorting plant to be collected from the CPK, police office, cargo terminals, air traffic control tower, airport operational centre, or rescue and firefighting facilities. 15 companies entered the competition.

– This tender was very well received by the market. 15 companies and design consortia, also from Poland, with experience in designing airport facilities applied. Therefore, we expect a lot of interest in the second tender – said Eliza Wysocka from the airport program design and engineering office.

Tenders open to all

The CPK points out that the contracts are open, which means that both Polish companies and foreign architectural offices can participate in tenders. Applications can be submitted until November 14, 2022. As a result of the competition, up to 15 companies will be selected.

Another new airport is also opening and that is in Radom.

Nervousness in the gas market. PGNiG is borrowing millions to prepare...

18/08/2022 0
Since the beginning of the year, PGNiG has entered into agreements for additional financing. Due to the horrendous gas prices, it is necessary. This...
Go to mobile version