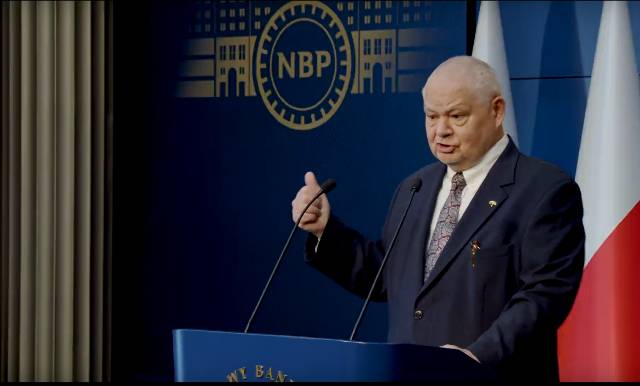 The cycle of interest rate increases hikes will probably continue in the coming months, until it is certain that inflation will decline permanently, informed the governor of the National Bank of Poland (NBP) and the chairman of the Monetary Policy Council (MPC) Adam Glapiński. He pointed out that the pace of monetary normalisation is calibrated in such a way as not to cause excessive social and economic damage.

Message to the World Economic Forum in Davos

“As the president of the NBP and the chairman of the Monetary Policy Council, I would like to emphasise that we treat our constitutional and statutory obligations very seriously. That is why in October we started a decisive increase in interest rates, which we will probably continue in the coming months until we are sure that inflation will decrease permanently” wrote Glapiński in the magazine of the Financial Observer in a message to the World Economic Forum in Davos.

He stressed that interest rates are now “not very high in historical terms” and in comparison to the region as well.

He pointed out that in the conditions of the ongoing war in Ukraine, the abandonment of Russian oil and gas, disturbances in supply chains, also related to the lockdowns introduced in China and port closures, inflationary tendencies may intensify.

”What will be the result of these phenomena for economic growth and inflation in the world and in Poland is very difficult to assess at the moment. We have to take into account that the Polish economy will remain under the influence of unpredictable global events in the near future, and the central bank will have to take this uncertainty into account in its decisions”,  wrote Glapiński.

“We have exceeded pre-pandemic employment levels, unemployment is at a record low. Wages are rising at a double-digit pace. The maintenance of strong economic growth with record-low unemployment, especially in view of the war beyond our eastern border, proves the enormous strength of our economy”,  assessed the president of the central bank.

Many interest rate hikes in Poland

The MPC started to raise interest rates in October 2021 and raised them every month. In total, after eight increases including the May one by 75 bp – the main reference rate increased by 5.15 percentage points. up to 5.25 percent.

Glapiński has recently got a new term as the Head of the National Bank in Poland.

25/03/2022 0
The general government deficit is the deficit ratio measured according to the methodology of the European Union. It makes it easier to compare the...
Go to mobile version