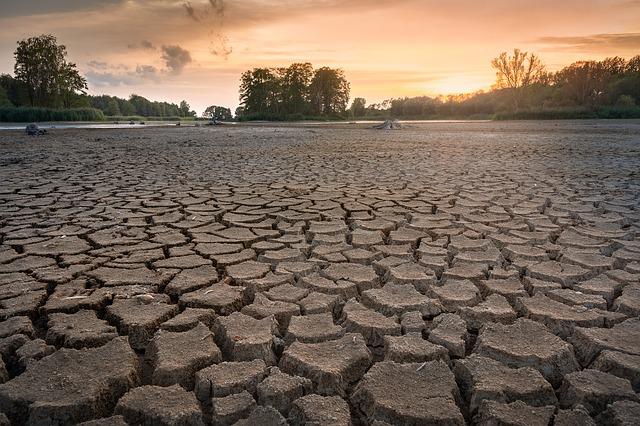 Inflation slowed down a bit and even WIBOR stopped going crazy, but there is one more danger on the horizon, which may also empty our wallets. It is about the drought that is destructive to vegetables and fruit, which has been with us for so long that we stopped paying attention to it.

The seriousness of the situation is proved by the fact that warnings against hydrological drought have already been issued for over 50 rivers.

Europe is already plagued by drought, and the summer heat is not over yet. There is so little water in Italy that the Po River has unveiled a WWII bomb. In France, July 2022 was probably the driest July since 1958. Almost all of France is now facing a more or less intense drought.

As many as 90 of the 96 French departments are now put on drought alert, some of them on a red alert that imposes restrictions on water consumption.

This phenomenon does not bypass Poland either. The forecasts of the Institute of Meteorology and Water Management indicate the occurrence of a hydrological drought in August in our country.

The current forecasts of meteorological conditions indicate that in August there will be no significant improvement, mainly due to high air temperatures and increased evaporation – says the IMGW forecast of August 3.

In addition, there is also an agricultural drought, which, according to the analysis of the Institute of Soil Science and Plant Cultivation, in the period from June 1 to July 31, 2022, occurred in 14 provinces.

This year’s pea yields are very low. Compared to the previous year, the yield decreased by about 60%. Also the population of rye did not cope with the drought in our region and today it can be said that the yield is lower by about 20%. – the Agricultural Experimental Station in Wierzbno reports its troubles.

The IUNG-PIB report for the period from May 21 to July 20 indicates that at that time most of the country’s area of ​​rainfall was from 30 to 40 mm, i.e. it was only 50-70 percent. This, in turn, suggests that water shortages will determine the amount of crops in all voivodeships.

Higher prices of vegetables and fruits in Poland

Poorer yields mean fewer vegetables and fruits to sell, which in turn drives up prices. You can see it now, even on raspberries. Last year, in wholesale, you could find the price per kilo of these fruits in the vicinity of PLN 15-16.

Now, for example, in the Bronisze Warsaw Agricultural and Food Wholesale Market, a kilogram of domestic raspberries can cost as much as PLN 36. This situation was also influenced by increases in labour and transport costs. But the decisive factor is still the lack of water.

We still cannot prevent drought. In Poland, the retention rate, i.e. how much water we keep falling from the sky, is approx. 3 percent. For comparison, the Spanish have 11 percent, – says Andrzej Gantner from the Polish Federation of Food Producers in an interview with Polsat News.

The vegetable market is also very nervous, especially cabbage and cauliflower. There is still little cabbage on the market, which makes it extremely expensive. You have to pay even 5 zlotys and more for one head.

Meanwhile, last year’s maximum prices were more than two times lower and amounted to PLN 2.28 for a head of cabbage. The same is true of cauliflower. Now you have to pay from 3.50 to 4 PLN for one piece. A similar price occurred in August 2021, but in June last year one cauliflower cost only PLN 2.15 per piece.

According to the Central Statistical Office, in June 2022, vegetables were more expensive than the year before by 8.5 percent, and fruit by 6.2 percent.

But it was not only the unfavourable weather and the resulting drought that were responsible for this. The significant increase in fertiliser costs is also not without significance.

We observed the first increases at the end of last year. All because of too expensive gas. Later, the situation was additionally complicated by the Russian aggression against Ukraine, which excluded the fertiliser market in Russia and Belarus from the global system – those responsible for the production of almost 40 percent potassium and multi-component fertilisers.

No wonder then that the UN agency, the World Food Program (WFP), reports that grain production in 2022 could potentially drop by 16% year on year, thanks to very expensive fertilisers and fuels.

A sharp increase in revenues from the export of Polish food....