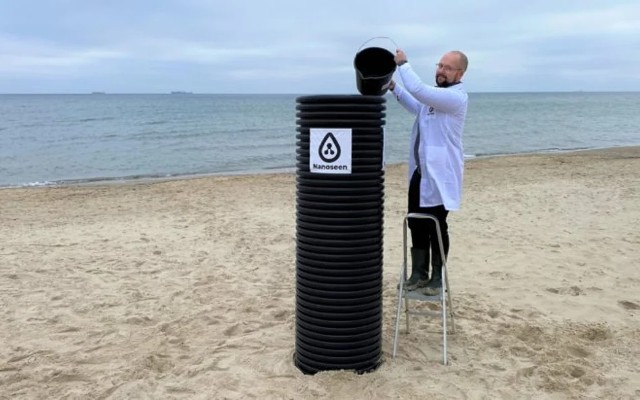 Nanotechnology is a way to fight climate change, obtain drinking water and plants and conquer space. Nanoseen wants to use its potential.

Toruń’s start-up is just moving into the Pomeranian Science and Technology Park – this is where Nanoseen will develop and implement its innovations in the field of nanotechnology. And today the Polish company ranks in the group of leading start-ups in the chemical engineering industry, not only on our continent.

Food incl. plants on other planets?

The company led by Bartosz Kruszka is a young team of engineers and scientists dealing with advanced nanotechnology, consisting in the creation of various nanometric structures, i.e. at the level of individual atoms and molecules.

In 2020, the start-up created the NanoseenX water desalination and purification technology. Technology that is supposed to improve people’s lives is a unique solution because it does not require additional energy. It uses only the force of gravity in the filtration process.

An additional assumption of the Nanoseen project is the use of nanotechnology under development in the field of space exploration. The NanoboosteX powder developed by the company enables fast and natural food cultivation on other planets as well.

The company takes part in the Deep Space Food Challenge competition organised by NASA, the aim of which is to create automated technology for the cultivation of, among others, plants in a mission to mars.

“This year, we will start a pilot program for the implementation of our product NanoseenX at our partners around the world, incl. in Singapore, the United States, Norway, Sweden, Japan, Israel and India, as well as in Spain and the Philippines” lists Bartosz Kruszka, co-founder and CEO of Nanoseen.

As he emphasises, the start-up has the ambition to be a global company, a leader in the nanotechnology industry. The first sale of the Polish company’s product is planned for next year. Kruszka forecasts revenues at the level of approx. 200 thousand. euro. – We have already started the implementation pilot of the NanoboosteX product at our partners in Poland and Cambodia – he emphasises.

From Toruń to the Tri-City

The company from Toruń – as it describes itself – is a team of nanotechnology enthusiasts and scientists who prove the extraordinary properties of nanomaterials as the basic ingredient of the company’s products, solving many civilization problems. The energy-free, non-pressure solution for water purification and desalination is only the first step of an innovative company. I want to implement the next ones from Gdynia. Kruszka emphasises that it is here that he wants to develop at a very fast pace.

The Nanoseen team will ultimately consist of 15-25 specialists. Initially, the recruitment of talents will focus mainly on scientists (research and development specialists), then the company will look for experts in the field of marketing, PR, sales and business management.

“In cooperation with Invest in Pomerania, we convinced the team to choose the Tri-City “, says Katarzyna Gruszecka-Spychała, vice-president of Gdynia.

Shee hopes that the example of Nanoseen will be a magnet for more start-ups. “The Tri-City is becoming an increasingly interesting location in terms of implementing R&D activities. We owe it to educated employees coming from Tri-City universities, but also to the high quality of life, thanks to which companies operating in Pomerania easily attract specialists from other parts of the country and Europe”, adds Mikołaj Trunin, Deputy Director of Invest in Pomerania.

Court: the tax office may block the account of any entrepreneur...

19/05/2022 0
The tax office may block a bank account, the so-called STIR to every entrepreneur - confirmed in the latest judgement of the Supreme Administrative...
Go to mobile version