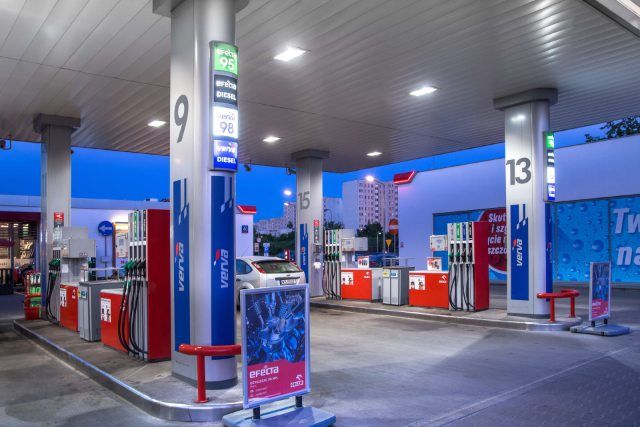 On Thursday, the crude oil price at times reached 120 USD a barrel. It was its highest price since 2012. In the following minutes, however, it began to decline, which calmed down the already highly unstable moods in international markets, at least for a moment.

But It does not change the fact that the oil price has a decisive influence on fuel prices.

The latest data from the e-petrol.pl portal shows that on Wednesday the average price of diesel was 5.92 PLN at the Polish gas stations, 5.87 PLN for Pb95 gasoline, and 2.74 PLN gas for cars.

Meanwhile, a week earlier, i.e. just before Russia’s aggression against Ukraine, they amounted to 5.46 PLN, 5.41 PLN and 2.69 PLN, respectively. Nobody knows how they will develop further, except that fuels will continue to become more expensive.

“Today, fuel price forecasting is like reading tea leaves. Taking into account the current situation, I think that in the coming days an increase in the average price of diesel at stations to 7 PLN per L and Pb95 gasoline to 6.5 PLN is possible.”says Grzegorz Maziak, fuel market analyst at e-petrol.pl.

He notes that further changes in the fuel market will depend mainly on the development of the situation in Ukraine and, to a certain extent, on the possible lifting of the embargo on Iranian gas, which would allow for an increase in its supply.

Another issue concerns the Polish market. It’s about fuel logistics.  “Some stations have problems with obtaining diesel or gasoline, which, combined with high demand, means that they cannot serve all drivers.

As a result, prices are beginning to reflect this state of affairs”, says Maziak. In his opinion, for this reason, various problems in the transport industry are also starting to grow. Moreover, if fuel logistics are not improved, other sectors of our economy will suffer.

Other analysts are also certain of further increases in fuel prices. “In the coming days, the increase in diesel retail prices to 6.7 PLN per L and in a slightly longer perspective to 7 PLN is fully realistic.

Wholesale prices already justify such a move at gas stations” says Urszula Cieślak, analyst at BM Reflex. In her opinion, in the case of Pb95 gasoline, the changes may be smaller, because the demand for this fuel is also lower. As a result, a relatively quick increase to 6.15 PLN should be expected, and then to 6.5 PLN.

All this, however, on condition that there is a certain stabilisation on the fuel market. “It includes o slowing down further increases in the crude oil exchange rate and the decline in the zloty exchange rate.

Speaking of the current situation, it should also be remembered that reducing the supply of Russian oil and increasing the purchases of other types of oil are usually associated with higher costs for refineries”, says Cieślak.

In her opinion, the current situation in the world and in Poland is reflected in fuel prices. Thus, it is not the result of speculation on the market, but of the universal high prices, problems with fuel logistics and queues at stations.

It should also be noted that fuel prices would already be much higher than the current ones, if not for the recently introduced tax cuts.

The reductions in excise duty by the end of May and VAT until the end of July resulted in a reduction in the average payments for each litre of gasoline and diesel purchased at stations by approximately 1 PLN at the beginning of February.

In this context, the declaration made by Deputy Minister of Finance Piotr Patkowski in the Sejm (the lower house of the bicameral parliament of Poland, ed.) seems important that the dynamic situation on the fuel market may determine the extension of anti-inflationary shields.

It was within their framework that the government reduced the tribute, among others, on fuel.

Orlen, the largest producer, wholesaler and seller of liquid fuels at stations, ensures that it has fully secured crude oil supplies to its refineries in Poland, the Czech Republic and Lithuania.

Moreover, the raw material for these facilities is sent on an ongoing basis, and in the event of suspension of imports from the eastern direction, oil is to be obtained from alternative directions.

Plenty of fuel in Poland

The concern from Płock reached an agreement with Saudi Aramco on five additional supplies of crude oil by tankers. As a result, continuous production in refineries is possible, which is to guarantee a stable supply of fuels to the market. In his opinion, there will be plenty of fuel in Poland.

But most likely it is not only these energy prices that will go up in the next months.