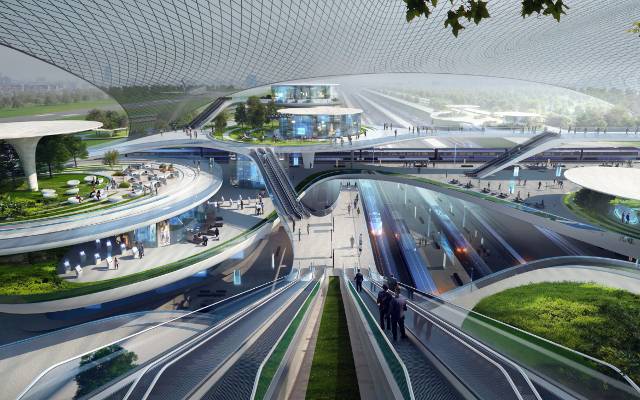 The discussion on the so-called Central Communication Port a giant airport project with train connections etc and near Warsaw was “moved” to the Senate on Monday, where experts presented their main concerns about the mega-project. Their reflections were bitter, and there were also no representatives of the other side.

The project of the Central Communication Port, planned for the construction of an airport, which, in the mind of the authorities, is to be a response to the exhausting capacity of the Warsaw Chopin Airport, arouses great emotions in the public opinion. In discussions on this topic, we often deal with extreme arguments of supporters and opponents of investment.

During the Monday conference in the Senate entitled “CPK for Poles or against Poles. The costs and threats of the mega-project ”, however, there was no opportunity to see how polarised the issue of the CPK is – the event was not attended by representatives of the company responsible for the construction of the airport. On the other hand, independent aviation and economic experts gave their speeches.

The main objections to the new giant airport project?

In addition, on routes to Asia we are dealing with enormous competition from carriers – the leaders are giants in the form of airlines from the Persian Gulf or Turkish Airlines.

As the expert added, air connections to Asia lead mainly over Siberia. This is problematic, especially now that approvals need to be obtained – and paid for from Russia.

2. LOT Polish Airlines is too small a carrier to serve a large transport hub, which is to be CPK. They are also not competitive with the largest low-cost airlines in our region, such as Ryanair and Wizz Air. Moreover, LOT Polish Airlines is dependent on public aid, while the largest competitors, such as Lufthansa, receive loans on financial markets. According to the expert, the fleet is also too small.

“In order for this investment [CPK – ed.] To “tighten”, LOT should increase the transit transport fourfold. Mainly intercontinental, because no one knows which of the giants [like Ryanair – ed.] Will eventually fly long distances. LOT should also have 50 long-haul aircraft, now it has 15 – said Marek Serafin.

3. Doubtful transport forecasts. According to the expert, it is difficult to rely on them because there are no pessimistic forecasts among them. Meanwhile, all alternative variants should be investigated, such as a duoport, i.e. cooperation between Chopin Airport and Warsaw-Modlin Airport, or the difficult situation of LOT.

4. Spending public money without an idea. According to the expert, the project does not take into account the share of the Modlin airport in the Polish aviation market, while the Radom Airport is being built, which has no business justification.

5. Monocentric railway system. In the STH project, the railway component is very important, i.e. the construction of approx. 1.8 thousand sq m. km of new railway lines leading to the megalopolis. Most of them are to be High Speed ​​Railways, which will shorten the travel time to STH from the largest cities in Poland to less than 2.5 hours. The scheme according to which “all lines lead to the STH” does not like Tomasz Wardak, the author of the first publication on the megalobot.

“In Madrid, Barajas airport has no connection with the high-speed train at all, in Paris, Charles de Gaulle port is connected by a railway bypass, however, the French have not decided to connect directly to the HSR, considering that passengers are more interested in travelling to the centre of Paris. The issue of connection with the airport is a side issue” , Wardak gave examples from other airports in Europe.

As he argued, the planned railway system is “not suited to our country, geography and main urban centres”. He also cited the position of the Committee for the Spatial Development of the Country of the Polish Academy of Sciences, according to which the planned railway system is a “threat to the polycentric system of the country”, and an evenly distributed network of connections, such as in Germany or China, would be more appropriate.

It is significant that the representatives of the CPK did not appear at the conference in the Senate – as Marcin Horała, deputy minister and government plenipotentiary for the construction of the airport, stated in social media, no one from the company was invited to it.

However, it is impossible to get the impression that the readiness for a substantive, substantive dialogue is slim. As usual, there is social interest and public money at stake – which can be easily forgotten in the centre of political games.

The most common reasons for changing jobs in Poland in 2022...