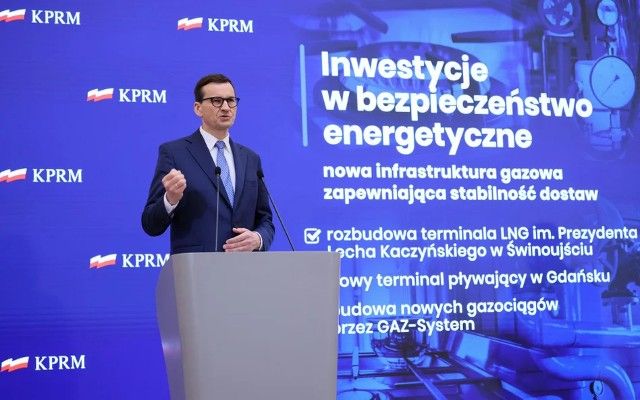 Poland’s entrepreneurs’ organisations have a lot of business demands to the government as a reply to the anti-Putin shield program presented recently by the Polish government.

It should be urgently extended with new solutions that will help our companies to go through this difficult period, says the entrepreneurs’ organisations.

“Already today, Polish companies operating on eastern markets suffer the negative consequences of the Russian aggression against Ukraine. We need actions in the economic field, addressed precisely to them”, says Łukasz Kozłowski, chief economist of the Federation of Polish Entrepreneurs.

Meanwhile, the so-called The anti-Putin shield, the implementation of which the government announced last Friday, does not propose any such solutions.

For now, this shield is mainly an announcement of subsidies for fertilisers for farmers and the expansion of infrastructure, which is to make Poland independent of Russian gas.

Prime Minister Mateusz Morawiecki also appealed to companies operating on the Russian market to suspend these activities and announced support for them. But no details are available.

“And this support is needed immediately, it should be the main element of the anti-Putin shield”  comments Grzegorz Soroczyński, chief economist of the Polish Chamber of Commerce.

As he points out, Polish companies are already feeling the sanctions imposed on Russia (and the Russian response), for example in the form of the inability to settle accounts for delivered goods or the implementation of contracts for products imported from the east.

The scale of the problems will grow, because not only the government, but also the public, calls for a boycott of economic relations with Russia, and the ban on trade involving more goods is being considered on the EU forum.

“The anti-Putin shield should not be as generous as the anti-Covid shields, but in order to limit the consequences of the current situation, it is necessary to launch instruments to support the liquidity of companies, e.g. in the form of loan guarantees or preferential debt financing”, Kozłowski analyzes.

This is all the more important as many companies are already experiencing credit withdrawals and an increase in financial security costs.

“Some form of assistance, and we already know from the Prime Minister’s announcement, that unfortunately it will not be financial assistance, it could be an attempt to find outlets for the products or services of companies involved in Russia” adds Mariusz Zielonka, an economic expert of the Lewiatan Confederation.

“For this purpose, the diplomatic services of the Ministry of Foreign Affairs could be used, which should have an understanding of where given products or services can find a potential market” he adds.

As for the costs of such support, it does not appear to be excessively high. Polish business has been diversifying its activities in foreign trade for years, and there are few companies for which business in Russia would constitute a significant part of their revenues.

Zielonka reminds that according to OECD data, approx. 13.500 people export their goods to this country.

Companies that cooperate with Ukraine, whether as part of the exchange of goods or operating there, also require appropriate support. “Here you need, among others a simple, quick way to move companies from Ukraine to Poland in potentially large numbers” emphasises Rafał Baniak, President of Employers of Poland.

“This is a chance to keep businesses and jobs in the transition period, as well as a chance to rebuild Ukraine after the war”  he adds.

“Many Polish companies that have production lines, assembly plants, etc. located in Ukraine, simply lost their production capacity and even had to cease their activities. They need help to get out of this situation” adds Łukasz Bernatowicz, vice president of the Business Center Club.

Bernatowicz emphasises that the effects of the war against Ukraine are spreading more and more over the Polish economy. The outflow of Ukrainian workers (the Border Guard informs that 274,000 people have left Poland since February 24) is hitting the transport industry hard, where drivers from Ukraine account for 10-20 percent. the entire population of drivers, and in the construction industry.

“There is a growing risk that companies that participate in the implementation of infrastructure projects will not be able to complete the work in accordance with the contract in terms of deadlines and costs.

It is precisely due to staff shortages, but also the growing prices of investment materials. This is also a threat to projects co-financed from the EU fund, and appropriate solutions are urgently needed”, emphasises Bernatowicz.

There are many more demands for the government from business organisations. There are many questions about the possibility of suspending the EU climate policy for a certain period, including the so-called the mobility package for transport, which is driving prices today.

What measures does the government intend to take to protect companies against shocks on the energy resources market, e.g. in the event of an embargo on Russian gas, coal or oil?

“Another important thing is to create various types of incentives for international companies, including production companies that are withdrawing from Russia today, to locate their activities in Poland” emphasises Łukasz Kozłowski.

“A wide wave of facilitations for entrepreneurs in general is important, because today the priority of economic policy should be to make their lives easier. We have a deep crisis in business, and the reaction is much smaller than in the face of a pandemic – Rafał Baniak says.

And it postulates, inter alia, quick unblocking of the Reconstruction Fund for Poland, stopping tax changes of the Polish Deal tax reform, but also deregulation and reducing bureaucracy in the economy, so that companies can adapt to new conditions.

Poland has so far spent this amount to help Ukrainians in...

01/09/2022 0
During the six months of the war in Ukraine, PLN 1.04 billion was spent on benefits for Ukrainians refugees who came to Poland as...
Go to mobile version