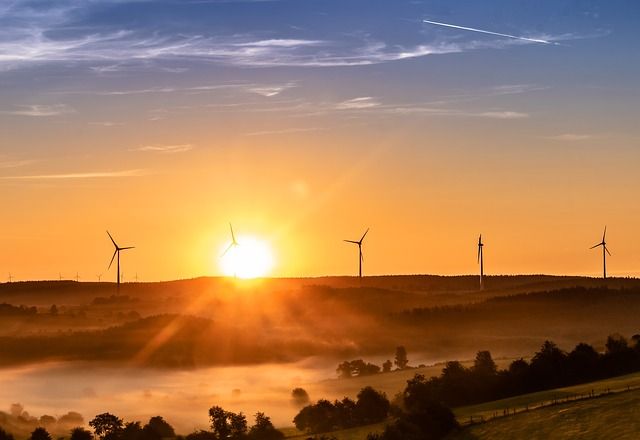 Windmills may be part of the solution when it comes to not being dependent on gas from Russia. The reason is that windmills provide more and more of Poland’s energy resources and in February it was record high.

Windmills generated as much as 2,629 GWh of electricity , which was as much as 19.6 percent. the total work of the Polish energy sector this month – according to the data of the European Network of Transmission System Operators.

Such a result means an increase in production year to year by as much as 103%, although the capacity of wind energy increased by only 11.5% during that time. In January, although it was a month longer than February, and even though the wind was good, there was less wind power, 2532 GWh, or 16.9 percent. production of the entire energy sector.

The historically record-high hour for wind power in Poland was between 6 p.m. and 7 p.m. on Wednesday, February 16, when wind farms produced 6,718 MWh, or 29.3 percent. energy in the system at this time.

The record day was February 21, when 153 GWh was generated, which gave 30.2 percent current in the system. Many turbines did not withstand the hurricanes and even burst into flames. Windmills were burning in Przyłęk near Nowy Tomyśl, near Grudziądz, in Bojanów near Poznań .

At the end of 2021, wind energy accounted for only 12.7 percent. installed capacity in the system, i.e. its share in production in February (19.6%) and January (16.9%), was much higher than the share of capacity indicated. Other power plants had to give way to the windmill system.

Lignite-fired power plants made the most of this place, reducing the share in electricity production from 26.5%. in January to 23.6 percent. in February and energy production by 20.3 percent. month to month . The high prices of CO2 emission rights in combination with the high emissivity of lignite make this source of energy relatively expensive.

Of course, the situation is changing. On Thursday, March 3, the price of CO2 rights fell to the lowest level since November 15, i.e. to 66 Eur per ton. On February 8, the price was above 98 euros. Due to high prices of energy commodities, the market can expect changes in the EU ETS.

In February, the production of energy from natural gas also decreased by as much as 19 percent. compared to January. Gas prices in Europe are doing their job.

At the end of February, the Dutch contracts had to pay almost EUR 100 per MWh of natural gas, compared to 16.30 Eur a year earlier. Suddenly, this source was first in line to cut production as windmills and other renewable energy sources increased.

Offshore wind capacity is still under preparation
Investments in new wind capacities in Poland are hampered by the act, which requires keeping the distance from buildings to 10h, i.e. 10 times the height of the windmill.For this reason, the prospects for the development of this energy sector can only be seen at sea. So far, no kilowatt-hours have been produced in Poland from offshore windmills and preparations for construction are just underway.

Controlled by Dominika Kulczyk, Polenergia together with Wind Power AS from the Norwegian Equinor group (formerly Statoil) is getting ready to build offshore wind farms with a capacity of 3 GW. For comparison, the total capacity of onshore wind energy in Poland was at the end of last year. 7 GW, according to the data of the Energy Market Agency.

PKN Orlen wants to invest 47 billion PLN in modern energy by the end of the decade, of which 7 billion PLN in hydrogen. Part of the remaining amount will go to the construction of offshore windmills.

It is applying for seven licences for a total of 7 GW. It is also planning four more applications. Currently, Orlen, together with the Canadian company Northland Power, is developing the Baltic Power project – a 1.2 GW farm. Its construction is planned for the years 2024-2026.

The development of wind farms in the Baltic Sea is hampered by the limited transmission capacity of the power grids in the north of Poland. The most developed infrastructure is in the vicinity of Silesia and Bełchatów.

New applications for connection from photovoltaics are rejected even at 60 percent, due to the reservation for offshore windmills, which are to operate from 2026. But it is not all bad for photovoltaics energy.

The potential of the Baltic Sea results mainly from favourable wind energy conditions, such as its low salinity, relatively shallow depth and constant, strong winds blowing throughout the year – emphasises PKN Orlen.

Gasoline prices on Polish gas stations are going up strongly once...

16/05/2022 0
Gasoline prices on Polish gas stations are going up strongly once againThe price of a litre of 95 petrol reached even PLN 7.25 at...
Go to mobile version